These hideous lovely Thonet chairs are circa 1986, not quite vintage, but not far from being vintage either. If you’re curious the chairs were made by Shelby Williams Industries which purchased Thonet Industries U.S.A in the mid 80’s and continued to make the iconic bentwood chairs. I know these are pretty ugly, but I bought them for $10 a piece which I thought was a steal! Pictured below are the 6 I originally purchased, the seller wanted to keep 2 of the set of 8 for some reason, but I was able to go back and buy the other 2 because 8 really worked better at my table than 6… it was super nice of her to sell them to me, but I will tell you her husband was “thrilled to get rid of the ugly chairs”! 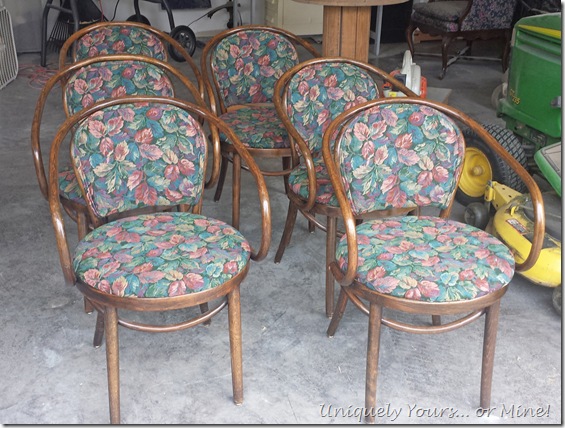 All of the chairs were structurally sound and very sturdy, but not exactly the look I wanted. So I set about making them a better fit for our family.

I started with removing the fabric from the chair backs. The seats were just plywood covered fabric that were easily removed by unscrewing a couple of screws from underneath.

I used my needle nosed pliers to grab hold of the piping and by pulling it away I was able to remove 99% of the staples holding the front fabric the frame… by the way please use gloves doing this kind of work, it will save your hands for sure! 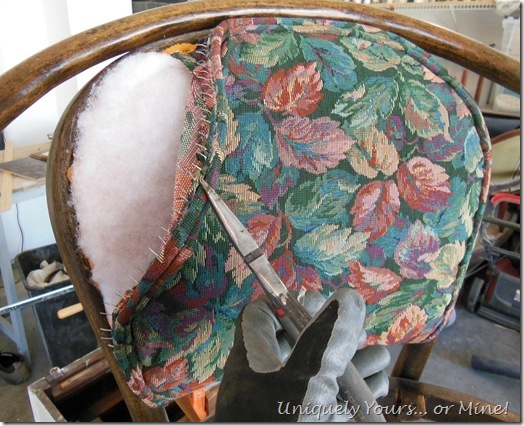 Underneath of the fabric is batten covered foam easily removed by just pulling on it.

Behind the foam is cardboard which is stapled onto the frame, I just pulled that off but most of the staples didn’t come off with it unfortunately. 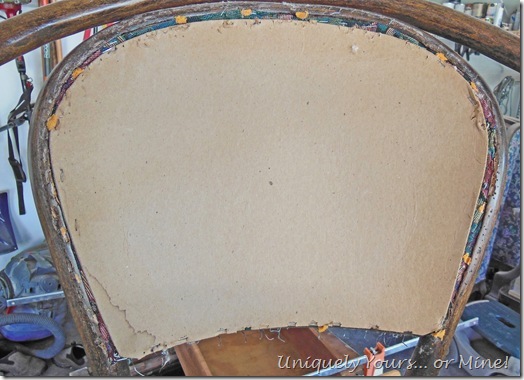 Behind the cardboard is the back of the fabric, again I used my pliers to remove the back and most of the staples.

At that point I had an open back chair, which looked so light and airy I was pretty sure that was the way I wanted to keep it, the problem was the bottom back stringer rod, it looked weird and needed to go. I used my jig saw to cut the stringer off and then used a flexible fine toothed handsaw to cut as close to the wood as possible.

And this is what I ended up with, a wood frame with a grove running all around the back and a couple of handfuls of staples to remove.

As a small side note I purchased these Kobalt 4.5” pliers a few years ago, they make removing staples so much easier and they cost about $6. This was the tool I used to remove all of the carpet pad staples from the upstairs subfloor so we could install the hardwood floors. It would be a great addition to your toolbox!

Next I used my pliers to remove any staples that still remained.

Then I mixed my wood filler, below is my favorite 2 part wood filler, it is awesome for filling large holes and rebuilding parts of furniture. The down side is that you must work fast as it starts to dry in about 5 minutes, but that is also the upside of the product. You can carve it with a knife after just a few minutes of applying it and you can sand it in about 30 minutes. It’s pretty stinky and you most certainly want to wear gloves, but it’s a fantastic product!

I basically globbed (very technical term) the wood filler in the holes and then sanded the areas down with 120 grit sandpaper on my mouse sander. I would usually use my orbital sander, but for this application the mouse sander was easier to control and rotate back and forth to maintain the round shape of the wood.

I then inspected each area and added a second coat of filler where necessary and repeated the sanding process as well. This is an example of what most of the areas looked like once everything was filled and sanded.

Before priming each chair I took a piece of 150 grit sandpaper and lightly hand sanded the rest of the chair. I then cleaned the chairs with a paper towel and Formula 409. My plan is to paint these chairs a shade of grey, so I chose to prime them with grey spray paint. 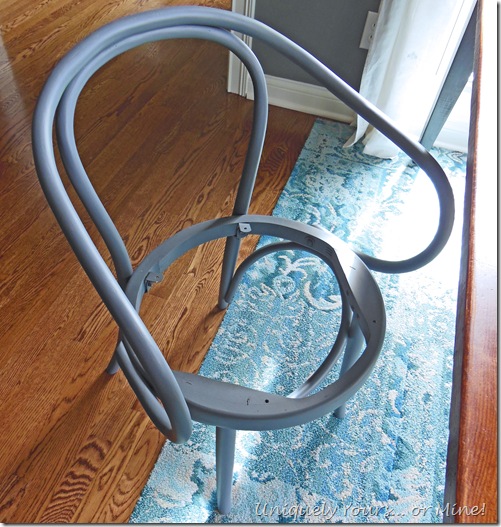 I’m still trying to decide what color to paint them and I’ve picked up several swatches of fabric but none of them is just right, so the chairs will not be finished for a little while yet. However, they’ll need to be finished by Thanksgiving because I already sold the chairs we were using (oops!) at least this “problem” will keep me motivated to finish them!

Also, I would like to point out that each chair took me about 30 minutes to get to this primed point. I can guarantee you that if I had chosen to reupholster the seat backs it would have taken me at least 3 times as long. So even though this looks like a lot of work it was less work and expense than if I had reupholstered them, plus I like them this way so much more!

Hopefully I’ll find some fabric soon, any suggestions you may have for fabric choices are always welcome!! Thanks as always for stopping by… 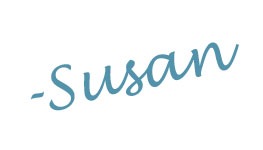