February 12, 2013 Susan @ Uniquely Yours or Mine Furniture refinishing 38 comments

I bought this set of four French Provincial style armchairs at the end of last summer, so yes it HAS taken me a while to get to them! I knew I wanted to treat them as two separate sets so that I could refinish each set differently.

Last summer I asked my middle daughter (16) to help me by removing the old fabric and staples… there were a LOT of staples but she watched TV in the cool basement while she was doing it so she wasn’t too terribly upset… honestly I think she was just happy she didn’t have to help me sand or paint in the hot garage!

After all of the staples were removed I sprayed two of the chairs with flat black spray paint, one coat, then I distressed the chairs with 220 grit sandpaper, waxed and buffed them to give them that rubbed through look… a very quick update. 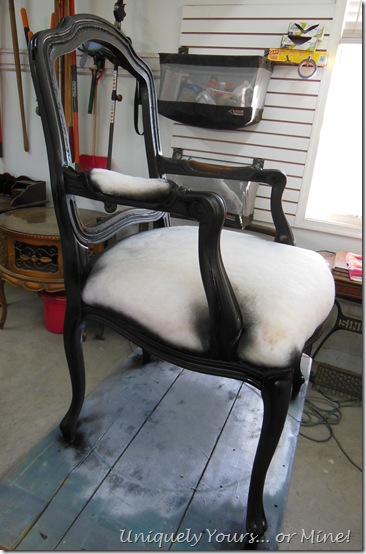 I refinished these two chairs as part of my upholstery class where I also refinished the French Script chair… I did some of the work at home and some of it in class so that I could make sure I could get them both done!

I chose this beautiful dark navy blue velvet fabric for the chairs… the fabric looks more blue in the pictures than it does in person, it is so blue it almost looks black. I made double welt piping for the first time, it was a little time consuming but I like the way it finished the chairs.

I love the lines of these chairs and how the original wood finish peeks through the black paint.

The finish on the chairs have a nice hand rubbed look… 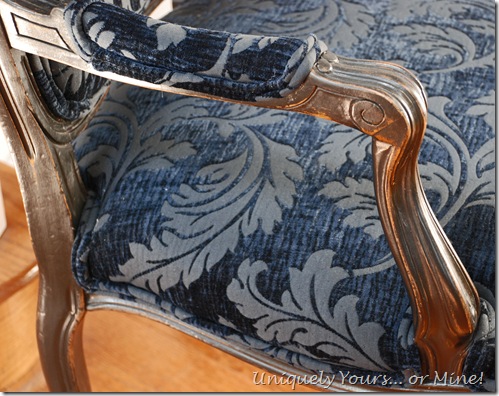 One of my favorite parts… the back! I upholstered both backs of these chairs with this fabulous French script fabric, the script is navy blue with a red seal stamped across the script.

I think the coordinating fabric was the perfect finishing touch for these chairs!

The four chairs were originally used as dining chairs, but I see them more as armchairs for the living room or bedroom… which is why I am treating the sets differently. This is not to say they wouldn’t look great as chairs in the dining room…

I hope you like them as much as I do, they were a labor of love and I lost quite a bit of skin from my fingers hot gluing that double piping down… YIKES!

I still have the other two to get to, I have the fabric… now I just need to make the time!

Thanks for stopping by…

Linking to these parties!
Between Naps on the Porch, The Dedicated House, Coastal Charm, A Stroll Thru Life, Sumo’s Sweet Stuff, Elizabeth & Co., Savvy Southern Style, Domestically Speaking, From My Front Porch to Yours