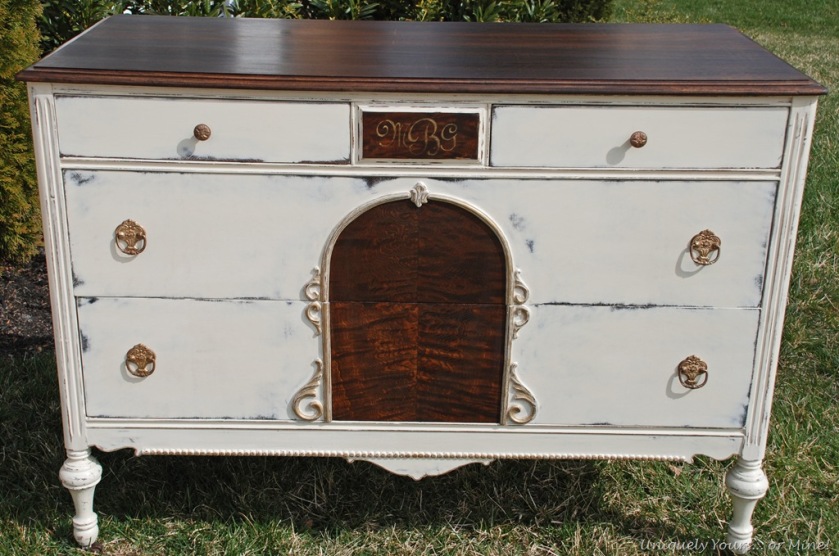 April 9, 2013 Susan @ Uniquely Yours or Mine Furniture refinishing 44 comments

I don’t always have a story about the pieces I refinish, but this time I do and it’s a good one!

I have a wonderful neighbor friend (Julia) who sent me a picture of an old chest of drawers, she wanted to know if I would like it as her friend was giving it away… Umm, yes PLEASE I replied! Unfortunately it was spoken for before I could get my hands on it, I was very disappointed! However, Julia (now my new “agent”) contacted her friend and let her know about the work I do and suggested she come see some of my stuff. Her friend (Barbara) is pregnant and just moved into a new (and bigger) house and is in need of some furniture. Barbara ended up buying the awesome stenciled chest for her husband… who LOVES it by the way… but as we were talking she showed my some pictures of the set she was giving away… I think I politely informed her that she was crazy but I can’t be sure

So between Julia and I we convinced her to keep the set and allow me to refinish it for the baby’s room… she was only sort of convinced that she would like them, but she had her hubby drop off the pieces anyway…

Other than significant veneer loss on the sides and a few onlay wood pieces broken, it was in good condition, but better than that it was going to be just beautiful and was going to make a perfect changing table / dresser! 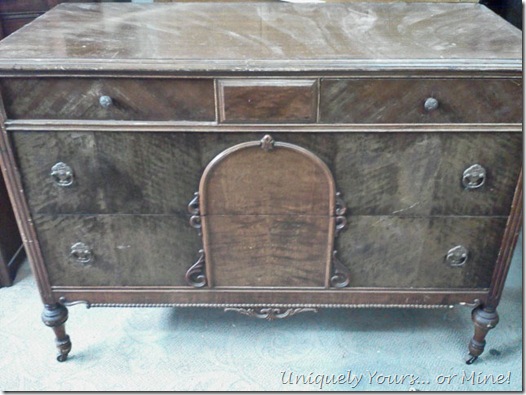 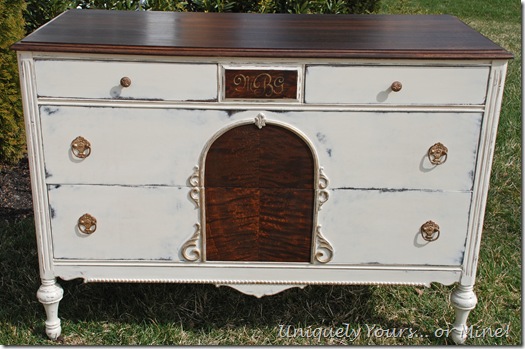 I knew it would be beautiful, but I am just thrilled at how it turned out! I was lucky that I was able to salvage the top… after sanding down the finish (100 to 220 grit paper) I stained it Dark Walnut and then conditioned it… in order… Dark Walnut Watco Oil, Howards’ Feed-N-Wax, Annie Sloan Dark Wax & finally Annie Sloan Clear Wax! It was a lot but I wanted to be 100% sure that the top was oiled and sealed because she was using this as a changing station as well as a dresser… you just never know… 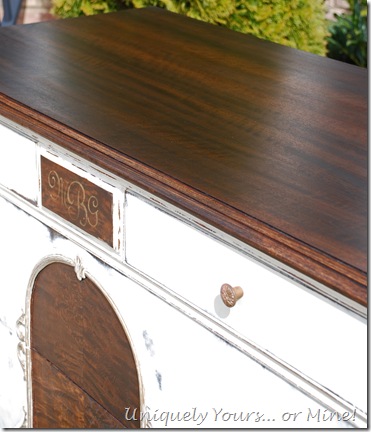 I also stained and conditioned two other areas on the front of the dresser, I love the way it breaks up the paint. I painted it in Old White Annie Sloan Chalk Paint… she’s having a little girl! 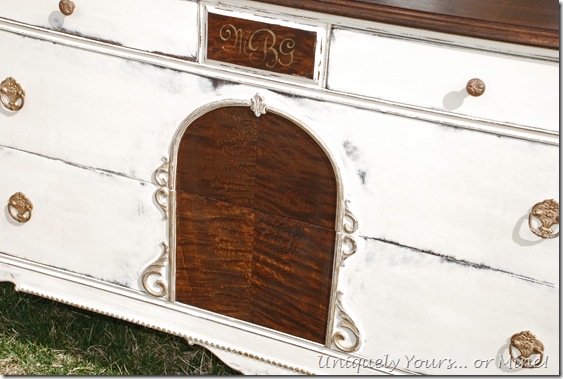 Where I had to remove some of the onlay I highlighted the areas with my gold paint pen or gold Rub-N-Buff. 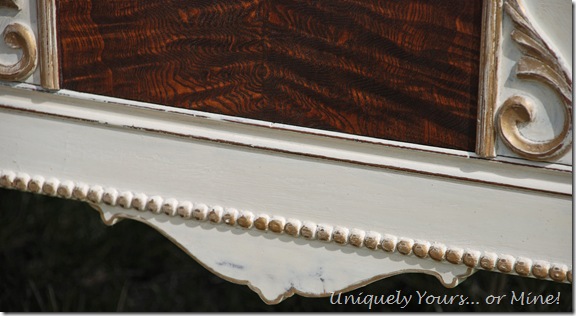 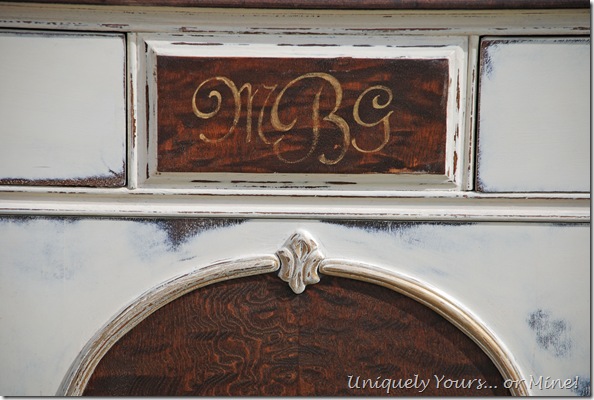 We were both pleasantly surprised with the way the knobs turned out! This is the original finish on them… I just cleaned them by soaking them in a solution of ammonia overnight and Viola! gorgeous handles! 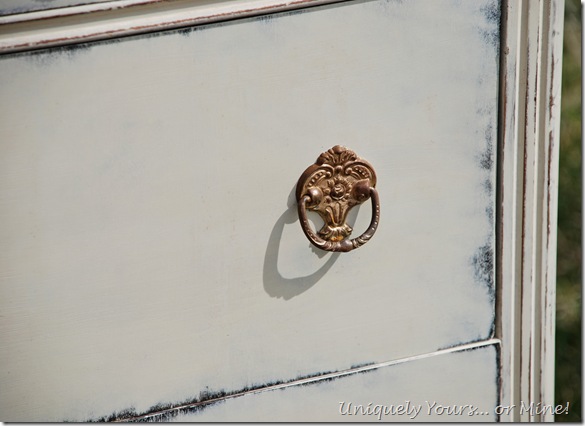 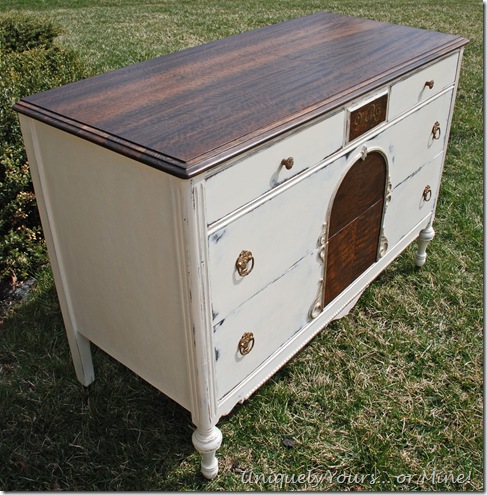 This was the last custom piece I am doing before the Lucketts Market coming up in May. I still have to finish the tall dresser that matches this chest… but that will be for after the market! This is the before of it though… can you believe she was giving these pieces away! 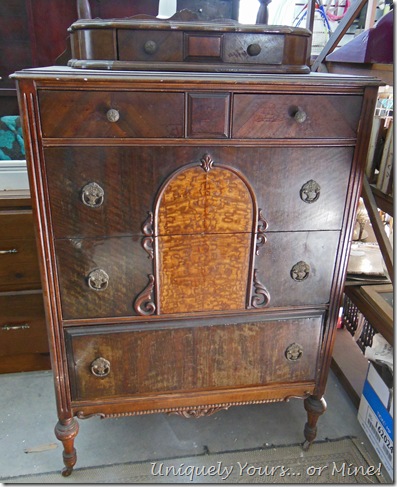 I hope you like the dresser transformation! I think it is easy to see how these pieces can be beautiful once again… for me it’s all about looking at the lines and details of a piece… the color and condition are irrelevant as that can be changed!

Thanks so much for stopping by…

Linking up to these great parties!
Domestically Speaking, From My Front Porch to Yours, French Country Cottage, My Romantic Home, Redoux Interiors, Miss Mustard Seed